An Invitation from the Author

You never know when an idea is going to sneak up on you, and not let go -- when you are going to have that “light bulb” moment.  Mine literally involved a light bulb.

One evening, I took a light bulb out of its package, and noticed that on the top, besides a display of the wattage and voltage, were two things: the GE logo, and, in all caps, the word CHINA. 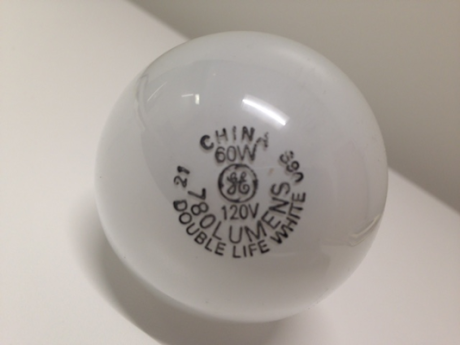 It struck me that, if General Electric was making its light bulbs in China, we might have a problem on our hands.

So, I set out to answer three questions:

Why does it seem like everything is made somewhere else, especially China?

Isn’t that causing a problem?

If it is, what can be done about it?

It proved more difficult to find the answers to those questions than you might think – with a lot of misinformation out there, I sought to learn, “what’s really going on?”  in doing so, I made some surprising and disturbing discoveries, among them:

·     Due to our single-minded pursuit of free trade and globalization, our smart phones were made in a labor camp, our clothes were made in a sweatshop, and our fish were caught on a slave ship.

·     Not content to create sweat-shops abroad, we have created a whole new kind of sweatshop here at home, the “distribution centers” where workers receive, store, pick, pack, and ship all those cheap foreign products.

·     We have created a “low-price, low-wage” economy, hollowing out the middle class and creating dependency and social ills: eight years into the “recovery” from the Great Recession, most Americans are not back to their pre-recession economic status.

·     Worse, many Americans have seen their lives, families, and communities destroyed when their jobs were sent offshore, as they were “volunteered” by their leaders in the project of eliminating poverty abroad or lowering prices at home.

·     On our present course, the future holds more of the same, and worse, as white-collar and high-skill jobs are being swept offshore along with the blue-collar jobs.

I have a favorite photograph of my children taken at the Memorial Day parade in Wayne, Pennsylvania in May of 2013.  There they are, in their trappings of flags and red, white, and blue, full of happiness, energy and hope.

Although I love that picture, it also haunts me.  My question is this:  When we have the conversation with our children as to what career direction they should consider, what do we tell them?

Do we say, here’s a list of jobs you shouldn’t train for, because there is someone in India who is ready to do it for one-fourth the pay?  Do we say, don’t bother studying to become a manufacturing process engineer, because those jobs can be filled in a town just over the Texas border in Mexico for $20,000 per year?

Do we try to figure out what jobs are “tradable,” and guide our children only to prepare for those that are not?  And if we give away all the tradable jobs, are there enough non-tradable jobs left, or do we end up with a fierce competition for them?  Could we in good conscience leave them on our current path?  I believe the answer must be a resounding “No.”

Fortunately, I have discovered that there is a way out, so elegant in its simplicity:

Bring the jobs home, and pay people a decent wage for performing them.

Bring home $500 billion in spending, enough to balance trade, create six million jobs, take the slack out of the labor market, and start a “virtuous circle” of growth.

But how to do that?  Happily, the power to do so lies in your hands, and the millions of other American consumers.  With our purchases accounting for nearly 70 percent of the economy, we can solve this problem just by redirecting some of the money we already are spending, to products made in communities across America.  Not only can we do this, but only we, as consumers, have the capability to do this.

So, despite its gloomy diagnosis of the past and present, and its gloomy prognosis if nothing is done, this book has the happy distinction of having a last chapter with a blueprint for how we can solve these problems, beginning today, without having to ask the government or anyone else for permission or support.

But time is running out.  Fortunately, there is a way forward, if we will realize the urgency of the matter.  But that window of opportunity will close.

So, I invite you to come with me on the journey to discover why that GE lightbulb was made in China, how big a problem that is creating, and what we can do about it, before it is too late.

Get Your Copy Now